Call them what you wish, turtles, tortoises, or terrapins, these fascinating reptiles all belong to the taxonomic order Chelonia, which includes about 250 species. In Australia, most people refer to all Chelonians as tortoises. Britons use “turtle” to refer to saltwater species, and “terrapin” for freshwater Chelonians. Most commonly in America, “turtle” describes aquatic or semi-aquatic Chelonians, and “tortoise” is used for land-dwellers. Turtles tend to have webbed feet and a streamline body shape, perfect for swimming. Tortoises, because of their terrestrial nature, do not have webbed feet and, in fact, their feet are round and stumpy for walking on land. Also, their shells are more mound-shaped since they do not need to be streamline for ease of swimming. So, where does “terrapin” fit in all of this? Terrapin, which is derived from an Indian word meaning “little turtle,” generally refers to Chelonians that spend time both on land and in water. Generally, terrapins are found in brackish, swampy regions, and never stray far from bodies of water. Also, “terrapin” is often used for Chelonians that are harvested for meat. 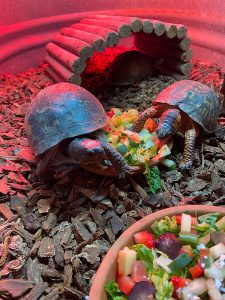 Conservation Status: Their future is uncertain, mainly due to loss of habitat and fragmentation from crossing busy roads or other man-made structures to find food and mates
Scientific Name: Terrapene carolina

The box turtle is just over an inch long when born. After hatching, the babies go into hiding to avoid predators. They can reach eight inches long as adults and in the wild, they will eat almost anything. This includes worms, insects, a variety of vegetable matter and even carrion. They can eat mushrooms, including those that are toxic to humans. Box turtles have a domed shell which is hinged at the bottom, allowing the animal to retract its head and legs and close its shell tightly to protect itself from predators. Box turtles are native to North America. The widest distributed species is the common box turtle which is found in the United States and Mexico. The Scovill Zoo box turtles are part of the ambassador animal collection. 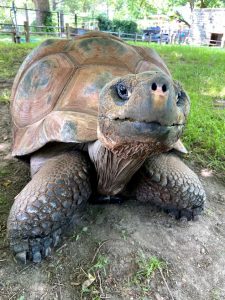 The Galapagos Tortoise is the largest living tortoise. It has massive limbs and a long neck. They spend most of their time in small herds and basking in pools or mud wallows. During the breeding season, males become territorial and start looking for mates. The females create nest chambers in the ground to lay eggs. However, the greatest threats to these tortoises come from the introduction of nonnative species, such as rats, cats, goats and cattle, which eat both tortoise eggs and young tortoises. If a tortoise survives past this threat into adulthood, they can live beyond 100 years. 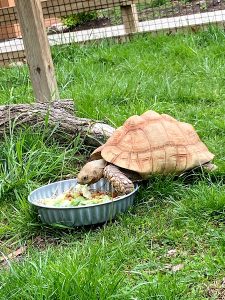 Leopard tortoises are named for the speckled pattern on their carapace. The carapace is domed and not hinged, with scutes (dermal plate of scale) only faintly raised. The nuchal (nape of the neck) is absent. The beak is sometimes hooked, is unicuspid and often serrated. These reptiles have been known to undertake extensive migrations in search of food. During hot, dry seasons they dig a hole in the ground and take refuge in it as a way to avoid dehydration and the extreme heat. They remain in this dormant state until the weather improves and the rains return. They can live up to 100 years. They eat grasses, annuals, thistles, and plant matter. The also may gnaw bones and hyena feces. They can be up to 21 inches long (females are much larger than males) and weigh up to 80 lbs.

Leopard tortoises are sexually mature at 6 to 10 years. The female lays 8 to 15 eggs. The incubation is 73-400+ days. The eggs have a tough shell, resistant to damage and rapid dehydration. The hole, in which she lays her eggs, is refilled and the female may tamp down the soil by lifting and dropping her shell regularly on the spot. Hatchlings weigh 23 – 50 grams and measure 40 – 50 mm. 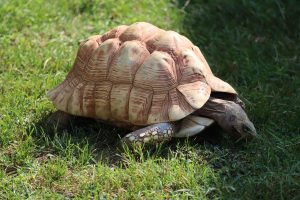 There are more than 40 different species of tortoise in the world; almost all are actually threatened with destruction of their natural habitat.

Identified by a prominent red stripe behind its eyes, this freshwater turtle lives in lakes, rivers, and creeks in North America. It is fond of basking in the sunshine, sometimes forming stacks when basking sites are in short supply. The turtles will dive quickly into the water when threatened or disturbed. Young eat tadpoles and other invertebrates. Adults eat mostly plant food. Our Red-eared Sliders are in the Herpaquarium.

The Red-footed Tortoise is so named because of the reddish and yellowish-orange dots on its front legs. The shell will have reddish or yellow blotches on its back. It lives mostly on plant food, such as leaves and fallen fruit, but it will also scavenge animal remains.

Males compete for breeding access to females, and fights sometimes result in one male pushing another over on to his back. The Red-footed tortoise frequently reaches ages of 50 years or more.

In 2004, with 16,742 votes, the Painted Turtle was voted the official Illinois Reptile. The opposing reptilian candidates were the Eastern Box Turtle and the Common Garter Snake. Among the world’s most colorful aquatic turtles, painted turtles are named for their bright red markings along the edge of the shell, or carapace. The painted turtle is a familiar sight in lakes and ponds across Illinois. These turtles are often seen basking on logs and aquatic plants, frequently in large congregations. By basking, these cold-blooded reptiles warm their bodies. The sunlight and resulting drying may also prevent the growth of algae and fungi that sometimes grow on the turtle’s skin and shell.
The shell length averages 4-7 inches; adult females are larger than males. The young are mostly carnivorous, eating snails, crayfish, earthworms, minnows, insects, and carrion. Adults are omnivorous, feeding on aquatic vegetation as well as animal matter.

Painted turtles are named for the bright red markings along the edge of the shell. There are 4 subspecies, which vary in markings, coloration and geographic distribution. Typical of aquatic turtles, the shell is low, making the turtle more streamlined in the water than if it had a high, domed shell. The large, webbed back feet are used for swimming. The head and feet can be pulled into the shell, but the shell cannot be closed.

In the wintertime, painted turtles dig into the mud at the bottom of their aquatic habitat. During several months of hibernation, they breathe by flushing water into and out of the cloaca, the chamber into which the digestive,, urinary and reproductive tracts converge just inside the body. Dissolved oxygen is absorbed directly through the cloaca’s thin walls that are richly supplied with blood vessels. Respiration in this way is adequate in the winter because the turtle’s metabolism is slowed down by the cold temperatures. The heart beats very slowly, and other body processes are equally slow. The slow metabolism means oxygen requirements are very low.

Baby painted turtles and small turtles of closely related species were once sold by the millions as pets. Healthy turtles, like many other animals, can carry Salmonella bacteria. If a person practices poor hygiene when handling turtles, he may infect himself with Salmonella, which can cause gastrointestinal illness. Many cases of salmonellosis in children were traced back to pet turtles. The children infected themselves by handling the turtles and then putting their fingers in their mouths or eating without first washing their hands. Other infected animals, such as rodents or birds, might not pose much risk because their droppings are not as likely to be contacted. But infected turtles, forced to defecate in their small bowl and then swim in the polluted water, are likely to have the bacteria all over their bodies.

Because of the risk of salmonellosis to children, turtles with shell lengths of less than four inches can no longer be legally sold as pets. Larger turtles are just as likely to carry the bacteria, but they are not as likely to be kept as pets by small children. Turtles, whether infected with Salmonella or not, are safe to handle. Just be certain that you wash your hands thoroughly before you eat, smoke, rub you eyes or put your hands in your mouth . Because children often forget to take these precautions, the zoo does not permit school children and visitors to touch the zoo’s turtles. You can find our painted turtles in the Herpaquarium.

Radiated tortoises can get up to 35 pounds in weight and eat a mixture of grass, leaves, fruit, and cacti. The carapace of the radiated tortoise is brilliantly marked with yellow lines radiating from the center of each dark plate of the shell, hence its name. Juvenile radiated tortoises lack the striking yellow patterns of adults. They are born white/off-white and darken quickly. As they age the dark patterns will gradually lighten.

Radiated tortoises are critically endangered due to habitat destruction and poaching.  They were once abundant in southern Madagascar but are now rapidly nearing extinction with less than 200,000 individuals remaining. They are part of a Species Survival Plan (SSP) in North American Zoos. Captive breeding has shown great promise. 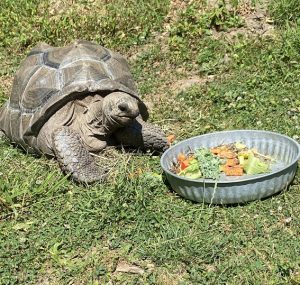 The Aldabra Tortoise is one of the largest tortoises in the world. An Aldabra tortoise weighing 672 pounds is the world’s largest free-roaming tortoise ever recorded. The carapace is a brown or tan color with a high, domed shape. It has stocky, heavily scaled legs to support its heavy body. They have long necks, which helps with food gathering. Primarily herbivores, Aldabra giant tortoises eat grasses, leaves, and woody plant stems. These tortoises like to rest during the hottest part of the day in the shade, inside burrows in the ground, or in shallow pools of water.