Banded mongooses live in groups of about 20, spending most of their time together. They are diurnal and sleep at night in a shared den—often an old termite mound—then head out in a pack to hunt for food. Group members communicate with each other constantly. They will twitter and grunt to warn other of danger. Mongooses mark each other with a distinct scent to reinforce their group bond. Sometimes they mark rocks, sticks, and grass clumps near their den

Mongooses use their sense of smell to locate their prey. Then they dig them out with their long claws.

Predators of banded mongoose include wild dogs, jackals, hyenas, snakes and birds of prey. Banded mongooses will gather and move together as a group toward a predator to scare it away – this is called “bunching”. They will also vocalize aggressively. They also have been seen as a group chasing a predator or lunging at it, to force it to drop a captured mongoose. 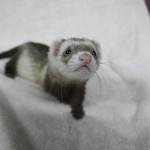 Male ferrets are called hobs. Ferrets also have a keen sense of smell and hearing. Their lithe, flexible and slender bodies allow them to chase mice and rats in burrows. They make shrill screams when fighting, but are curious and playful. They have a long tail and because they are a mustelid and related to the skunk and badger. They have musk glands that produce very strong scents. European ferrets are carnivorous and eat mice, rats, small mammals, birds, reptiles, and amphibians. They are 14 to 18 inches long and weigh between 2 and 4 pounds.

The number of European ferrets are dwindling but still at a stable level. Their smaller numbers are mainly due to habitat loss and an increase in human activities. The species is mostly domesticated. The European ferret’s close relative, the Black-footed ferret is still highly endangered, but do have a conservation success story. Black-footed ferrets were once thought to be extinct in the wild. Just over a century ago, hundreds of thousands of black-footed ferrets, and five billion prairie dogs, made their home throughout the North American prairie, which stretched from southern Canada to northern Mexico. When the plains were settled, ranchers saw these grass-eating prairie dogs as competitors of cattle and killed them by the millions. As prairie dogs disappeared, so did the ferrets. Prairie dogs are the ferret’s primary prey, and only two percent of the original prairie dog habitat remains today. Now the black-footed ferret is one of the most endangered animals in the world, but with the help of breeders and zoos it is on the road to recovery.