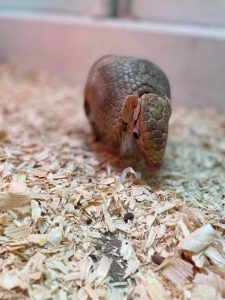 Three-banded armadillos eat beetle larvae. Ants and termites are another part of their diet during the dry season. During the wet season, armadillos eat fruit. They are primarily solitary and use abandoned anteater burrows as shelter. They do not dig their own burrows. Members of the genus Tolypeutes, they are the only armadillos that can completely enclose themselves in their own shell by rolling into a ball. This is a defense adaptation against predators. The large front and rear portions of the shell are not attached to the skin on the sides, providing free space to fit the head, legs and tail into the shell when the animals are rolled up. Three-banded armadillos are blackish-brown. Most have three moveable bands, although some possess only two, and others may have four. Other armadillo species have up to nine bands.

At Scovill Zoo we have one ambassador three-banded armadillo named Dozer.