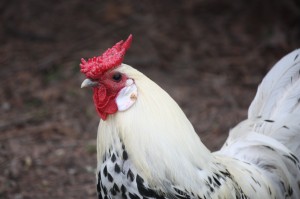 You can find our chickens in the Petting Zoo and wondering around the grassing area south of the Zoopermarket.

Reproduction: Chickens are polygamous, one male mating with many females. A hen will lay one egg daily until the clutch, or nest-full, is complete. A clutch is usually about a dozen eggs. The hen develops brood patches, or patches of bare skin on the breast, that warm the eggs. She incubates her eggs for 3 weeks until they hatch. To break from the shell, the chick taps the inside of the shell with its egg tooth, a projection on the end of the upper part of the beak. The chick slowly turns as it taps until it has cracked a line around most of the big end of the egg. It then pushes with its feet to free itself from the egg.

While the chicks are hatching, they peep. The peeping stimulates them all to begin hatching so they emerge within a few hours of one another. They stay in the nest for about a day while they dry and rest from the work of breaking from the egg. Then they follow their mother away from the nest. They don’t return to the nest, but instead snuggle under the hen at night wherever she chooses to sleep.

Baby chicks begin feeding a day or two after hatching. The hen scratches the ground to uncover food, she calls her chicks when she finds food, and she may lift food a few inches from the ground with her beak. However, she doesn’t actually feed the chicks as songbirds do.

Chicks grow quickly. They hatch with small wing feathers already present. Many can fly when only a couple of weeks old. Some males begin crowing when only 2 months old, although most start crowing later. Females typically begin laying when 4 to 6 months old.

Most chicks are now hatched in artificial incubators rather than under hens. The incubators provide the optimum temperature and humidity. They turn the eggs several times each day, just as a hen does. Turning prevents the developing embryos from sticking to one side of the shell. Once hatched, the chicks are distributed to farms. People can buy 25 chicks or more and have them shipped to any state via the U. S. Postal Service. The chicks are usually shipped by air from the hatchery to a regional post office. At least 25 chicks must be in each box so they can huddle together and keep each other warm. They require no food or water for the first 3 days after hatching. Just before hatching, the chicks draw the last of the egg yolk into the abdomen. The rich yolk provides the chicks with food and water for the first 3 days. However, they usually drink eagerly when they arrive at their destination.

Chickens were domesticated 6,000 years ago from the wild red jungle fowl of India and southeast Asia. Through selective breeding, naturally-occurring mutations were perpetuated, developing new characteristics in the birds. Today, more than 500 breeds and varieties of domestic chickens exist. They are kept for eggs, meat, and hobbies. 8 billion chickens are kept worldwide, making the chicken the most abundant kind of bird in the world. They provide nearly one-third of all the meat consumed by humans. The weekly egg production by the world’s hens is so great that the eggs would stretch to the moon and back if laid end-to-end. That’s about 11,600 million eggs per week — about 2 for every person in the world.

While small barnyard flocks are still common in the developing nations, a large chicken farm in the U.S. may house tens of thousands of chickens. They are often managed intensively in large, automated poultry laying houses. Laying hens are kept in elevated wire cages, 3 or 4 hens to a cage. Feed is delivered to them by an auger. Water is provided automatically to a drinking cup. Eggs roll out of the cage and onto a conveyer belt. Manure falls through the cage’s wire bottom to be collected regularly. Artificial lights extend the day length in winter to stimulate egg production. The hens are moved into the cages just before they begin laying. They are kept for about a year before they are slaughtered and replaced with young hens. The meat is used for chicken soup and other products.

Only a few breeds of chickens are kept for intensive egg production. The white leghorn is the most popular. Mature laying hens typically weigh 3 – 3 ½ pounds. Economical to feed, they are lightly-built chickens that put food into producing eggs, not meat. They begin laying when 16-18 weeks old, lay a large egg in comparison to their body size, and lay around 300 eggs each year. Broodiness, or the instinct to incubate eggs, has been bred out of them. Therefore, they don’t “waste time” trying to hatch eggs.

In the U.S., Most of the eggs sold have white shells. Brown-shelled eggs are available in some places, but usually at a higher cost. Brown eggs are no different nutritionally than eggs with white, green, blue, or other colors of shells. Hens that have been laying for a long time may deplete some of their calcium reserves, and their egg shells may become thinner. A laying hen actually uses some of the calcium from her skeleton to produce egg shells. When a hen is laying, she will eagerly eat crushed oyster shells or egg shells to replenish her body’s calcium.

Egg yolks can vary in color, depending on diet. Chickens that eat lots of corn and other foods high in the yellow and orange carotenoid pigments lay eggs with orange-yellow yolks. These eggs are sometimes preferred for baking, as they give the baked products a richer color.

Other breeds and hybrids are used for meat production. The white cornish, white rock, and crosses with these breeds are among the most popular. They grow quickly, have meaty bodies, and convert food to meat efficiently. “Cornish Hens”, the compact little birds that serve one person, can actually be of either sex. They are killed when only 4 to 4 ½ weeks old. At that young age, they already weigh about 20 ounces dressed. Broilers, weighing 4 ½ pounds dressed, are grown in 8 weeks. 8-9 pound dressed roasters are grown in 12 weeks.

Most chickens raised for meat on a large scale are white breeds. When chickens grow new feathers, the quills of the growing feathers are filled with blood vessels and soft tissue. In colored breeds, the growing feathers, or pin feathers, also contain feather pigments. When the pin feathers are pulled out as the birds are plucked, the soft tissue inside the spills out. In dark-colored chickens, the spilled pigments leave marks that look like ink smudges. For this reason, white chickens are preferred in commercial operations. (Most breeds of turkeys, ducks, and geese raised commercially for meat are also white for the same reason.)

BANTAM BREEDS
Although bantams do produce eggs and meat, these miniature chickens are kept mostly for fun. Breeders try to produce individuals that match the breed standards exactly. They enter their best birds in poultry shows. Many of the breed characteristics have no practical purpose. They have been perpetuated for human enjoyment. Some of the bantam breeds have been scaled down from similar standard, or large, breeds. Others have no standard breed counterparts.

COCHIN
This breed has a compact body, profusely-feathered feet, short rounded tail, and loose feathers that make the birds appear heavier than they actually are. There are many color varieties. Cochins have short wings and don’t fly very well. They are known for their good mothering abilities with chicks, friendliness, and quiet dispositions. The zoo has three color varieties: Barred, with each feather having alternating crossways bars of black and white; Red, with reddish-brown feathers; and one other color of undetermined variety.

WHITE-CRESTED BLACK POLISH
The profuse crest of feathers on top of the head grow from a large bulge of the skull. Part of the brain extends into the bulge. The crest feathers sometimes restrict the birds’ vision. In winter, ice may form on the front crest feathers when the chickens dip their beaks to drink.

MILLE FLUER
These chickens are brown with black and white speckles on their feathers. They have long feathers on the feet and frequently a muff on the face.

WHITE PLYMOUTH ROCK
These chunky chickens are used to produce many of the hybrid meat chickens in the U.S. They are popular with backyard chicken raisers because both he hens and roosters produce good meat. The hens, which lay brown eggs, continue to produce eggs in cold weather when many lighter-weight breeds stop laying. In the summer, the hens often become broody.

SILVER SPANGLED HAMBURG
This black-and-white spotted breed is known for its good foraging abilities when allowed to roam free on farms.

PHOENIX
The roosters of this breed grow very long tail feathers. Although a few rosters have tails 20 feet long, 3-6 feet is more common. For the tail to grow this long, the roosters need special care to keep the feathers clean and unbroken.

WHITE COCHIN
With profuse, loose feathering on the body, legs, and feet, the COCHIN looks larger and heavier than it really is. Our hen weighs 5 ½ pounds. Cochins are usually very calm and gentle.

ANSWERS TO SOME CHICKEN QUESTIONS

What stimulates a hen to begin laying?
Hens are stimulated to lay as the days get longer in the spring. In the fall, many stop laying as the days get shorter. To prolong the egg-laying season, many farmers keep artificial lights on after the sun has set.

Does a hen have to mate to lay eggs?
No, a hen can lay eggs without ever mating. Of course, if she hasn’t mated, her eggs will be infertile and won’t hatch.

How can you delay the onset of broodiness in a hen?
You can delay broodiness by removing eggs from a hen’s nest instead of letting them accumulate. (Leave one egg or a fake egg so she will keep coming back to the nest to lay.) A hen becomes broody when the nest “Feels full.” When lots of eggs press against the hen’s breast, nerve receptors in the breast send nerve impulses to the brain. The brain then starts producing hormones that stop laying and start broodiness.

What is the purpose of a rooster having wattles and a comb?
A rooster’s wattles and comb are two of the things that identify him as a rooster to the hens. They make him “attractive.”

What are spurs?
Spurs are sharp points on the insides of the legs. They have a bony core and a keratin sheath. Roosters fight by jumping up into the air and stabbing with the spurs. Spurs continue to grow throughout life, but they often get broken when they get very long.

How scarce are hen’s teeth?
Very scarce. Like other birds, chickens have no teeth. Hard food is pecked apart and the pieces are ground up by the gizzard.

Why do roosters crow?
Despite what people often believe, roosters don’t crow to wake us up. They crow to proclaim their ownership of a territory, warning other roosters to stay away. Although roosters crow more frequently in the morning, they actually crow all day long, and even, occasionally, at night.