Did you know that today there are thousands of amphibian species in danger of becoming extinct? While some people might think, “they’re just a bunch of frogs…big deal!” The truth is they are a big deal! Amphibians play an important role in our fragile ecosystem. Without them there would be a lot more pests flying around our heads and potentially destroying beneficial plants and crops. Amphibians are also prey for other larger animals in the ecosystem. So not only would pests be abundant, but a chain reaction could occur, causing other animals to starve.

Toads and Frogs form the largest group of amphibians. There is no clear distinction between the two, but the terrestrial species with the squat body and warty skin is normally referred to as “toad.” Frogs generally have smooth skin. Tadpoles, larvae of toads and frogs, feed on algae or plant material. In adults, the back legs are often longer and more muscular for jumping. The fertilization of eggs in most species is done externally. The eggs either drop individually, in clumps or along threads. The eggs will either float, sink, attached to plants, rocks, or logs. 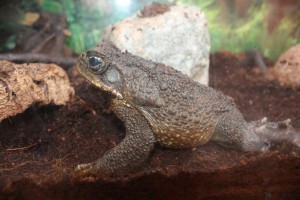 Order: Anura
Family: Bufonidae
Range: The natural range of the neotropical giant toad extends from extreme south Texas through Central America and the Amazon Basin. The giant toad has been introduced to Florida and several other parts of the world.
Habitat: Occupies a variety of habitats with fresh water available for egg-laying.
Conservation Status: Locally Common
Scientific Name: Bufo marinus

This toad goes by many different names including the Neotropical Giant Toad, Giant Marine Toad, and Cane Toad. It can grow up to 9 ½ inches. Females are larger than males. In the wild, they will eat small animals of all kinds, ranging from earthworms and insects to small vertebrates, including frogs and small snakes. These toads have also learned to eat dog and cat food, and occasionally vegetable matter. At the zoo we feed them earthworms, crickets and mealworms dusted with a vitamin/mineral supplement, and young mice.

Neotropical giant toads spawn whenever rain forms suitable pools. The eggs are poisonous to many other animals that might eat them. These large toads are active mainly at night. They hop rather than leap like frogs. Their gray brown color helps camouflage the toads, but they have several other defenses as well. They inflate their bodies with air, the increased size making them intimidating to potential predators. They can shoot a stream of urine up to 3 feet. The skin releases a sticky, white poison that is potent enough to kill a dog if the toad is eaten. The poison is released from all of the skin, but especially from the large oval parotid glands behind the head. After handling a giant toad, be careful to wash your hands before eating or rubbing your eyes. The toxin is very annoying to cuts and mucous membranes, such as the eyes and mouth. It is harmless to your skin.

Giant toads have fairly dry, warty skin. The smooth belly skin is often moist. The toads soak themselves in water for long periods of time. Although they are also called marine toads, these toads are not marine. No amphibians live in saltwater, since their thin skins do not protect them from water loss when in salty water.

The idea that people get warts from toads is a myth. Human warts are caused by a virus that is contracted from other humans.

Often called ornate horned frogs or Pac-Man frogs, these amphibians are generally green with red, yellow, and black patterns. Albino versions of this species are brilliant red and yellow in color because they lack the pigments that produce dark colors. Horned frogs have very large mouths compared to their overall body size. They do not actively hunt; instead, they hide and wait for their prey to wander by. Their camouflage keeps them well hidden beneath leaves and dirt. After killing its prey with its powerful jaws, the frog then swallows it whole, hence the nickname “Pac-Man.” Since they will eat almost anything that moves, horned frogs must be kept alone in captivity. Females generally reach up to 6 inches in length and width, and males average 3 inches. They eat crickets, worms, fish, and the occasional young mouse.