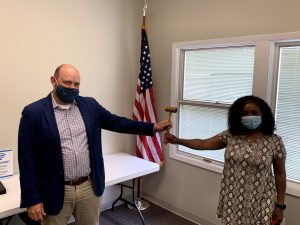 At the Decatur Park Board meeting on Wednesday June 3, 2020, Commissioner Stacey Young was named President of the Board and Commissioner Jack Kenny was named Vice President.

The Board’s election and approval of these officer positions endorses its goal of having individuals in leadership positions who are committed to serving the Park District, involved in the community, and representative of the diverse population it serves in the Decatur community.

Ms. Young, is the Manager, Community Relations at Ameren Illinois. She is a native of Decatur, a graduate of DLI, a mentor for Big Brothers Big Sisters, past member of the Grow Decatur initiative, past president of the Decatur Rotary 180, member of Alpha Kappa Alpha Sorority, Inc., past board member for Decatur Day Care and United Way of Decatur and Mid Illinois. During her term as Commissioner, she has expressed her passion for the growth and sustainability of Decatur by keeping our community beautiful, safe, and economically stable to attract people and commerce to this area.